I woke up this morning wanting pancakes but didn’t have any milk.  Then I thought of muffins, same problem.  After about an hour of lazing in bed, I remembered about breakfast pizza.  A while ago I found The Easiest Pizza Dough in the World on everybody likes sandwiches and tried it out. It is a great no-rise pizza dough.  Great for a lazy day off.  I changed it a little for breakfast pizza.

Breakfast Pizza using the easiest pizza dough in the world

based on the recipe from everybody likes sandwiches

1-2 tablespoons butter, either cold and cut into small pieces or warm and spreadable
1 teaspoon cinnamon
1/2 large apple sliced thinly
2 tablespoons brown sugar
Preheat oven to 200C (400F). In a large bowl, add in the yeast and warm water and stir until the yeast dissolves. Add the flour, salt, honey, and oil and stir with a wooden spoon vigorously until combined. Let dough rest for 10 minutes.

Sprinkle cornmeal onto a walled baking sheet and press dough into it until thin (I used a silicon baking sheet and skipped the cornmeal). Spread butter over top, sprinkle with brown sugar and cinnamon over top. Lay sliced apples over top and mist with oil. Bake for 20-25 minutes until pizza crust is golden.

***Btw, my camera has finally been fixed so there should be a marked improvement in picture quality from now.

I tried making two new flavors last night for breakfast this morning.  I had to do my favorite toast topping combo first; peanut butter and banana. It wasn’t proper peanut butter it was peanut sofuto (ピーナツソフト) which seems to be a sweetened spread similar to peanut butter but much lighter and creamier.  The second pizza I topped with ripe persimmon slices and cinnamon, no sugar or butter.  The persimmons were fresh from my MIL’s garden and delicious.  I this batch of dough with half whole wheat flour and half all-purpose flour.  I like it better than all all-purpose flour. 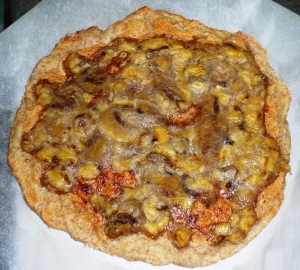